Monday: Gym – After my long run the day before, I was feeling pretty tired on Monday. I won’t bother writing out what I did at the gym, because I didn’t put much effort into anything and felt like I was wondering aimlessly from exercise to exercise.

Tuesday: 3M @9:10 – This was definitely a step outside of my comfort zone. Marathon Sports was hosting a group run & private shopping night (with 20% discount) for a local running group that I’m part of, but not super active in. As soon as the event was posted I committed to going, but the closer it got the more I wanted to back out. It was fun and I’m glad I went, but still a bit awkward for this semi-introvert.  I did take advantage of the 20% discount to pick up a new sports bra, some GU, and a metatarsalgia pad to hopefully alleviate some of the discomfort I’m having in my right foot on runs. I also got to test out a pair of Brooks Launch shoes that felt very spring-y and much softer than my Wave Rider’s. During the first half of the run I thought the softer forefoot might be an improvement over my Mizuno’s, but on the way back the discomfort, which I can only describe as a nerve firing in between my toes, started up.

Wednesday: Plan: 5 x 1000m @7:33 – Actual: 10 min w/u, 4 x 1000m @7:35 (.3M RI @10), 1M c/d = 5.75M @8:45 – Since my little one had a doctor’s appointment Tuesday morning and I knew I’d be running later that night at the Marathon Sports event, I moved my speed work to Wednesday. As is becoming my (bad) habit, I skipped out on the last interval. These didn’t feel terrible, but by the 4th one I was struggling to make it through the whole repeat. I feel like part of my struggle is doing these on the treadmill vs. outside. Looking back at old training logs I can see a difference in my speed work paces once I started running them outside. Right now I’ll stick with running them on the treadmill since my husband runs in the morning before he leaves for work. I am able to run during the day so I wouldn’t hijack his running time, but as it starts to stay light out later I can maybe do some runs after our girls go to bed. There’s a local track nearby so that should be easy enough to do, but with heavy commuting traffic I probably won’t attempt tempo runs at night. There’s a reason drivers here are known as Massholes!

Thursday: Plan: 6M Easy – Actual: 6M @9:31 – Pace felt comfortable. I’ve been feeling so bored on the treadmill lately. I have a couple podcasts I like (Run to the Top, Totally Married, and Another Mother Runner), but they don’t engross me as much as a good show. Any suggestions for good podcasts or running music?

Friday: Plan: 1M Easy, 3M @ Short Tempo, 1M Easy – Actual: 1M @9:20, 3M @8:13, 1M @9:09 – 5M @8:37 – Friday morning was “Beach Day” at my oldest daughter’s school and I got to help out in the classroom. Between getting to go in to read a book for her “VIP” week at school, helping decorate the classroom for Beach Day, and then volunteering at the party, I’ve had an awesome few weeks of getting to see her in action at school. As a parent, it’s so incredible to get to see her in this little world that’s all her own. After I got home and put my youngest down for a nap I ran on our home treadmill. Hooray for Scandal! The pace felt comfortably hard, as tempo pace should, and I was really, really happy to have Netflix to watch during this. Knowing how mentally hard my runs at the gym have been lately, I think I would have psyched myself out at running 8:13 pace for this.

Saturday: Plan: 9M @HMP+20 – Actual: 9M @8:21- So, my long run pace was only 8 seconds slower than my short tempo pace this week and last week I ran it at my mid tempo pace. Yet it feels SO much easier to run it outside. Both runs were faster than I had planned, and I can’t tell if my fitness is just improving, or if I’m running harder than I should. I definitely don’t want to leave my best runs out on the training floor and then be burnt out for my race, but I also want to push myself to being a better runner. Both efforts felt like moderate intensity, they didn’t feel like I was all out pushing, but definitely harder than a typical Long Slow Run. I’m running a 5k next weekend that I’m planning to use to gauge my fitness.  I did put the metatarsalgia pad I picked up Tuesday night in my shoes and while they felt good the first 4 miles, I still had discomfort from time to time. It’s not painful, but it’s a distinct annoyance when it’s happening. 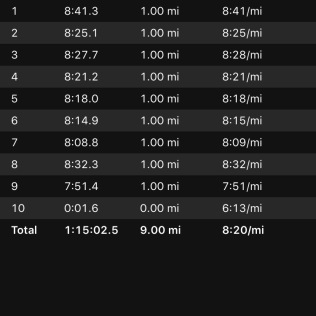 Over a training cycle how do evaluate & reevaluate your fitness and goals?

Do you belong to the “Long Slow Run” camp or the “In order to race fast you have to run fast” camp?

First run back and it was in the 🌞! Just a couple slow miles, drinking up that vitamin D #runner #herecomesthesun
Toasting to our completion of the Boston Marathon with my training partners. The @samueladamsbeer 26.2 brew was the perfect way to celebrate! 🍻I trained for my first two marathons by myself, but found a local training group two years ago. I'm so thankful for and impressed with these ladies who are so incredibly kind, smart, hardworking, and great moms. Oh, and we decided to sign up for another marathon 🤗 #neversaynever #boston2018 #bostonmarathon